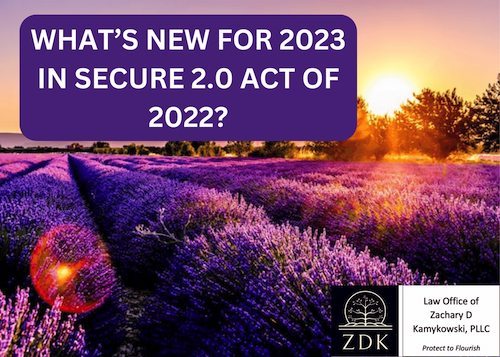 January 15, 2023 • Estate Planning • Retirement Planning • | Law Office of Zachary D Kamykowski, PLLC
In the dark of the night, snuggled within the 4,000+ page Omnibus Bill meant to keep the machine of government well-oiled, lies a passage that may change the future of retirement saving.

SECURE 2.0 Act of 2022 is an extension of the original SECURE Act, enacted in 2019, reports Forbes’ recent article entitled “SECURE 2.0 Passes—Here’s What It Means To Your Retirement.” An American Retirement Association press release notes the new law includes the following features:

About 108 million Americans would be eligible for the Saver’s Match, which would be directly deposited into their retirement account—upping the savings of moderate-income earners.

“We are grateful to the many members of Congress and staff who worked tirelessly to get SECURE 2.0 included in the omnibus legislation enacted this week,” noted Brian Graff, CEO of the American Retirement Association in Washington, DC.

“This important legislation will enhance the retirement security of tens of millions of American workers—and for many of them, give them the opportunity for the first time to begin saving.”

The Pension Protection Act of 2006 first introduced the concept of automatic 401(k) enrollment. This shifted the then-current 401(k) practice of requiring workers to opt-in before being allowed to participate in their company’s 401(k) plan to requiring them to opt out only if they did not want to participate.

The new legislation, SECURE 2.0, now has several provisions meant to encourage companies to create retirement savings plans for their workers.

For older workers who find themselves behind in their savings, SECURE 2.0 grants them higher “catch-up” provisions.