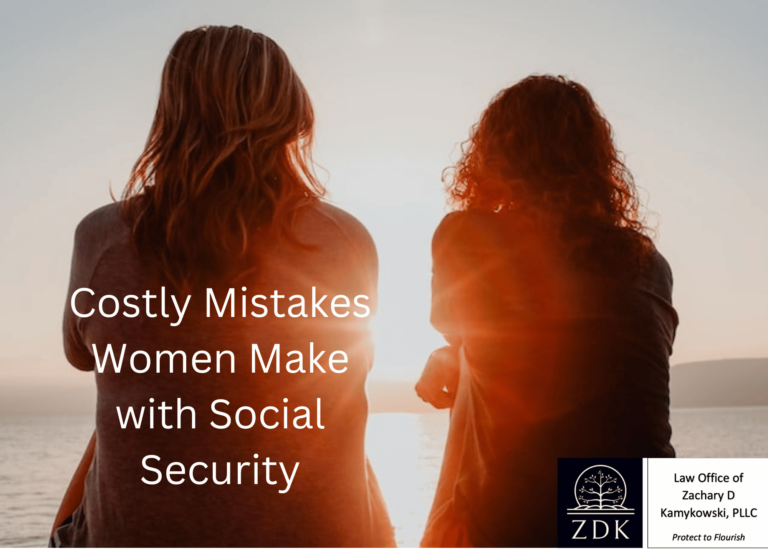 The article looks at some of the costliest Social Security mistakes women might make. As an Austin Estate Planning Attorney, I stand apart from my competition by also having a RICP® designation. As a Retirement Income Certified Professional, I can help clients optimize their Social Security claiming decisions.

Claiming their benefits too soon.

Single women and women in same-sex relationships or marriages are walloped by this mistake. Women usually have it harder than men when saving for retirement, as they have lower lifetime earnings and a longer lifespan than men, on average. For single women, these challenges are compounded by the absence of a significant other bringing in additional Social Security income — or any other type of retirement income. Accordingly, women in such circumstances should delay claiming Social Security benefits as long as possible, so their monthly benefit is more when they start getting it.

Forgetting about your ex.

If you were married and then divorced — and the marriage lasted at least ten years — you might be eligible for Social Security benefits through your ex-spouse. See if you’d get a better monthly payment by claiming through an ex’s earnings record. If you’re currently unmarried and at least 62, and your ex is at least 62, you can claim spousal benefits. Your own retirement benefits at full retirement age must be less than half of your ex’s benefits. Even if your ex hasn’t applied for benefits yet, you can file a claim on the ex’s account, provided you’re both at least 62. Remarriage results in a loss of ex-spousal benefits. However, if your later marriage also ends, you’re again eligible for the ex-spousal benefits.

Allowing your spouse to make a unilateral claiming decision.

A 2018 study from the Center for Retirement Research found that a husband can increase his wife’s survivor benefits by 7.3% each year by delaying claiming his benefits. However, many husbands don’t consider the effect their age in claiming benefits can have on their wives’ future benefits. Instead, many husbands tend to think about more immediate issues and decide to claim Social Security sooner. Despite being educated about the possible impact on their wives later, many husbands said they wouldn’t change their claiming age.

Talk to your spouse about how to best manage when each of you should file a claim for benefits. It’s best to coordinate your retirement plans and your Social Security claims.