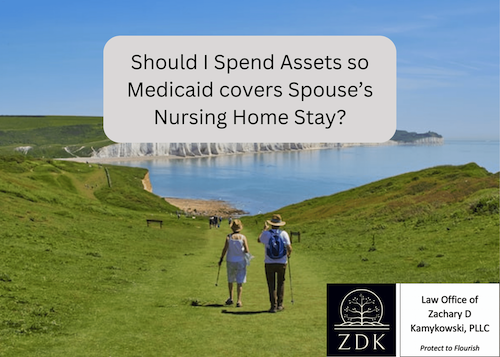 MarketWatch’s recent article entitled “Do I have to spend my assets before Medicaid will pay for my spouse’s nursing home?” cautions that the Medicaid coverage of nursing home care rules are very complicated. Medicaid is the federal-state safety net program for healthcare and pays for nursing home care.

However, to qualify, nursing home residents must prove that they’re impoverished under Medicaid’s rules. These rules are different in each state.

In most states, to be eligible, the nursing home residents must have “countable” assets of fewer than $2,000. States count almost all assets against this limit except for the resident’s home, which isn’t countable provided its fair market value (less any mortgage) is less than $955,000 (in 2022). (In some states, this limit is $636,000.)

If the nursing home resident is married, their spouse — known as the “community” spouse — is limited to $137,400 (in 2022) in countable assets. This is known as the community spouse resource allowance or “CSRA.” Note that in some states, the limit is half of whatever assets the couple owns when the ill spouse moves to a nursing home up to the cap of $137,400.

Spending down is spending savings until the couple’s assets are below the combined limit of $139,400. This spending can be for anything that benefits either spouse, whether it involves paying off debts, such as a mortgage or line of credit on the house, fixing up the house, buying a car, or even the healthy spouse taking a much-needed vacation.

As is often the case with Medicaid planning, the best strategy may differ in different situations. Consult with an experienced Medicaid elder law attorney.

Reference: MarketWatch (October 22, 2022) “Do I have to spend my assets before Medicaid pays for my spouse’s nursing home?”