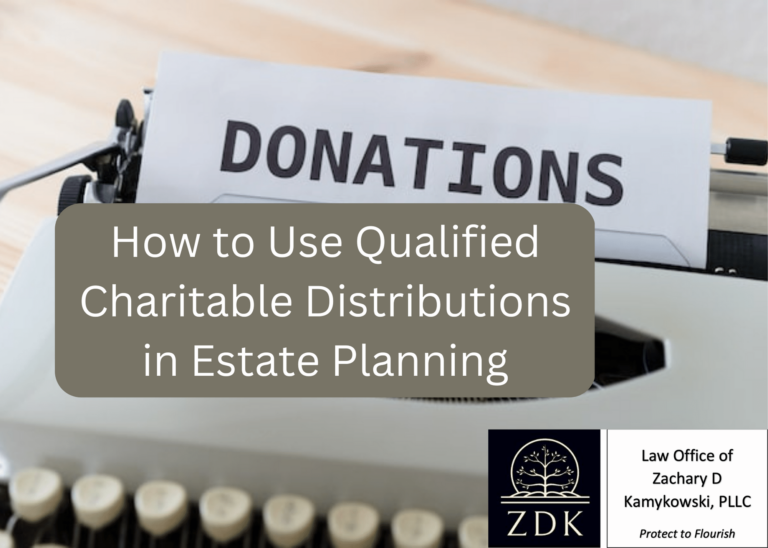 How to Use Qualified Charitable Distributions in Estate Planning

Assets held in Individual Retirement Accounts (IRAs) are unquestionably the best assets to gift to charity since IRAs carry a heavy tax burden. One way to reduce taxes is using the IRA for charitable giving during your lifetime, says a recent article, “Giving funds in IRAs to charity with QCDs,” from Investment News.

Most people who give to charity don’t receive the taxable benefit because they don’t itemize deductions. They instead use the higher standard deduction, which offers no extra tax deduction for charitable giving.

Here’s where the IRA for charitable giving comes in. IRAs usually may not be given to charity or anyone in the owner’s life (except in the case of divorce). There is one exception: giving IRAs to charity with a QCD.

The QCD directly transfers traditional IRA funds to a qualified charity. The QCD is an exclusion from income, which reduces Adjusted Gross Income. AGI is the most significant number on the tax return because it determines the availability of many tax deductions, credits, and other benefits. Lowering AGI with a QCD could also work to reduce “stealth” taxes–taxes on Social Security benefits or Medicare premium surcharges.

There are some limitations to discuss with your estate planning attorney. For instance, QCDs are only available to IRA owners who are 70 ½ or older. They can only be made once you turn age 70 ½, not anytime in the year you turn 70 ½. The difference matters.

QCDs are not available from 401(k) or other employer plans. They also aren’t allowed for gifts to Donor Advised Funds (DAFs) and private foundations, and they can’t be made from active SEP or SIMPLE IRAs, where contributions are still being made.

You can also gift appreciated stocks to qualified charities and take itemized deductions for the stock’s fair market value if you held it for more than one year. There’s no tax on the appreciation, as there would be if you sold the stock instead of gifting it.