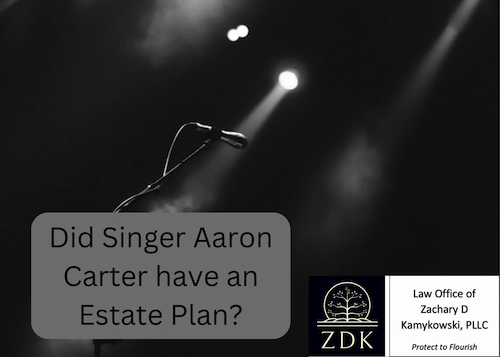 Aaron Carter came to fame as a teen pop singer in the late 1990s. He died at 34 on November 5 after being found dead in a bathtub at his home in Lancaster, California. Aaron apparently did not have an estate plan.

The Daily Star's recent article entitled "Aaron Carter's one-year-old son Prince to inherit estate following singer's tragic death" reports that the singer died without a will, and his family has since said it will ensure his son Prince inherits his estate.

Aaron's cause of death remains unanswered as his family awaits a toxicology report. His twin sister, Angel, has applied to be the administrator of his $550,000 estate as their family tries to protect his interests.

The late singer's mother, Jane Carter, said she wants to build on a relationship with Aaron's son Prince and his widowed fiancée Melanie Martin, whom she hasn't met yet.

Jane reportedly confirmed that she wants Aaron's estate to go to her grandson as the remaining family members already have enough money and don't need any of the inheritance.

Since Aaron's passing, his fiancé recently took to social media and wrote, "Not a day goes by, I don't think of you. I wish you were still here. Thank you to everyone that came out and made this possible.

"We were his family through thick and thin. No matter what."

His older brother, Backstreet Boys star Nick Carter, said how difficult it was for him to perform at London's O2 Arena just hours after learning of his brother's passing.

"It was very emotional for me, having my guys with me. There's the old saying, 'The show must go on,' that's been with us for years, but I didn't know what to expect that night."

The singer released four studio albums throughout his career and saw significant success with his self-titled debut album.